2)systematically extend and apply the SNOMED CT Observables concept model and SNOMED CT content to fully define those concepts and any relevant codes or terminologies identified by those members as required for their national terminology architecture,

4)maintain a set of classified (inferred) OWL ontology snapshots of those codes or terminologies specified by members as required for their healthcare delivery system. 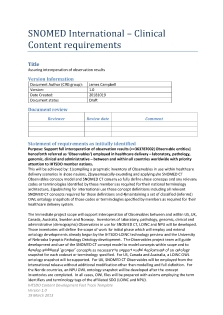