The SNOMED CT logical model provides the fundamental structure of SNOMED CT and specifies how the components can be managed in an implementation setting to meet a variety of primary and secondary uses.

Every concept represents a unique clinical meaning, which is referenced using a unique, numeric and machine-readable SNOMED CT identifier. The identifier provides an unambiguous unique reference to each concept and does not have any ascribed human interpretable meaning.

A set of textual descriptions are assigned to every concept. These provide the human readable form of a concept. Two types of description are used to represent every concept - Fully Specified Name (FSN) and Synonym.

The FSN represents a unique, unambiguous description of a concept's meaning. The FSN is not intended to be displayed in clinical records, but is instead used to disambiguate the distinct meaning of each different concept. This is particularly useful when different concepts are referred to by the same commonly used word or phrase. Each concept can have only one FSN in each language or dialect.

A synonym represents a term that can be used to display or select a concept. A concept may have several synonyms. This allows users of SNOMED CT to use the terms they prefer to refer to a specific clinical meaning. Concepts can have multiple synonyms, and the associated terms are not necessarily unique – thus two concepts can have the same synonym term. Interpretation of a synonymous term therefore depends on the concept identifier. 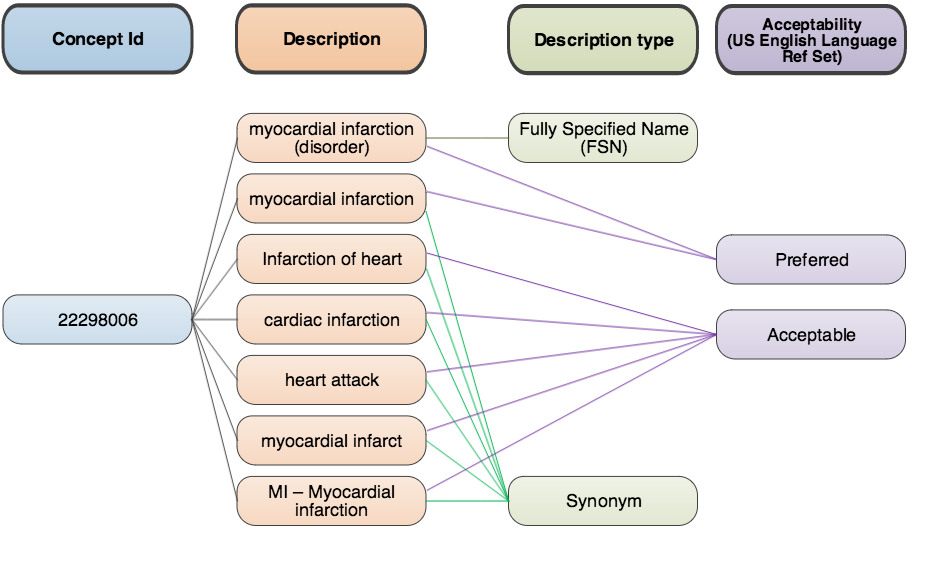 Example of descriptions for a single concept (US - English)

Each concept can have |is a| relationships to several other concepts (i.e. a concept may have multiple supertype parent concepts). As a result the SNOMED CT hierarchy is not a simple tree but has a structure that is known as a "polyhierarchy". 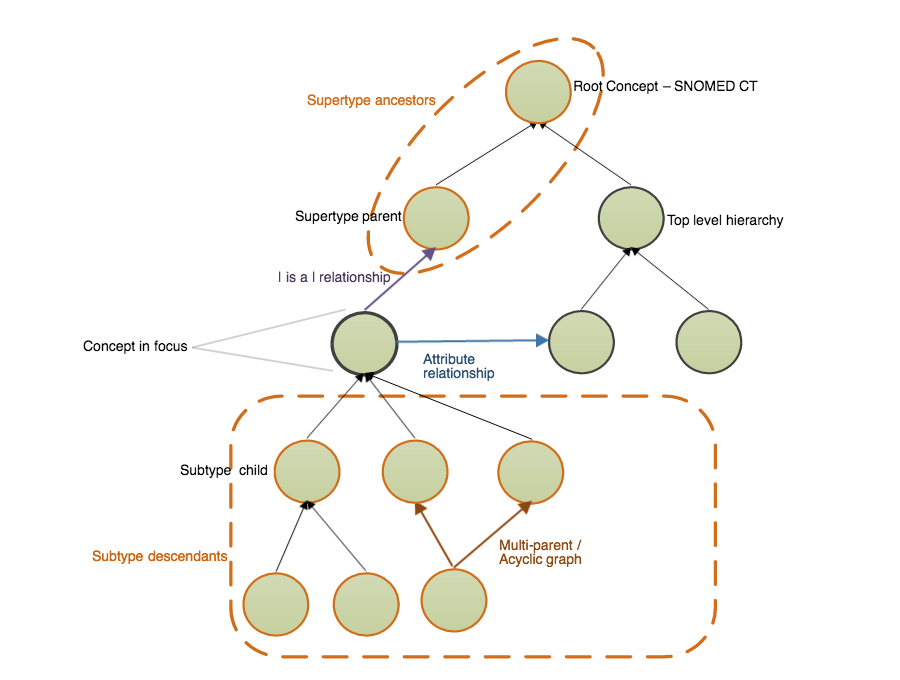 Unlike |is a| relationships, which are used to define all concepts, the applicability of each type of attribute relationship is limited to a defined domain and range. The domain refers to the concepts that can serve as source concepts for that type of attribute relationship. The range refers to the concepts that can serve as destinations (values) for those attributes. The domain and range specification ensure consistent definitions that can be used to infer additional semantic relationships to deliver reliable meaning-based retrieval of the composed meanings.

In SNOMED CT every concept is specified as either fully defined or primitive.

A concept is primitive (not fully-defined) if its defining characteristics are not sufficient to uniquely distinguish its meaning from other similar concepts. One example is that the primitive concepts|disease| and |drug action| share the same defining characteristics: namely a relationship of type |is a| to the concept|clinical finding|. This is despite the fact that the concepts|disease| and |drug action| represent different clinical ideas.

Reference Sets (Refsets) are a standard way to represent additional non-defining information about members of a set of components. Reference Sets are important as they can be used in SNOMED CT enabled applications to constrain, configure and enhance functionality to match requirements for different use cases. Some examples of the many uses of reference sets are to represent: