Below is a list of the Top Level Concepts with a brief description of the content represented in their branch of the hierarchy.

SNOMED CT attributes (or relationship types) are used to represent a characteristic of the meaning of a concept. SNOMED CT currently uses more than fifty defining attributes when defining the meaning of concepts. Each SNOMED CT attribute can be applied to concepts in one or more branches of the hierarchy. The set of concepts to which an attribute can be applied is called the 'domain' of the attribute. The permitted set of values for each attribute is called the 'range' of the attribute.

The domain is the hierarchy to which a specific attribute can be applied.

The range is the set of SNOMED CT concepts that are allowed as the value of a specified attribute. 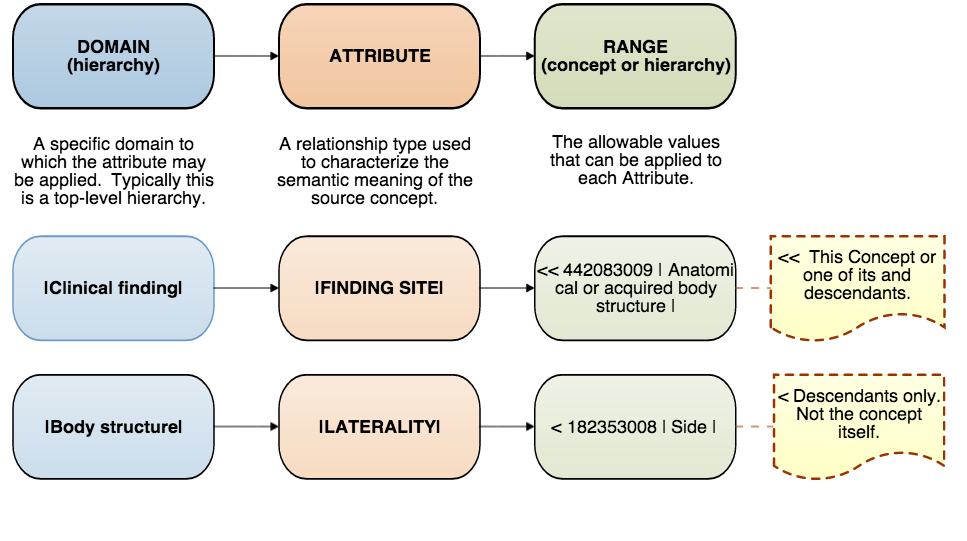 The SNOMED CT defining attributes are used to represent the meaning of concepts in these 9 hierarchies:

Below is a list of attributes used to define |clinical finding| concepts, and a brief description of their meaning:

|Finding site| specifies the body site affected by a condition.

|Associated morphology| specifies the morphologic changes seen at the tissue or cellular level that are characteristic features of a disease.

|Associated with| represents a clinically relevant association between concepts without either asserting or excluding a causal or sequential relationship between the two.

|Causative agent| identifies the direct causative agent of a disease such as an |organism|, |substance| or |physical force|. (Note: This attribute is not used for vectors, such as mosquitos transmitting malaria).

|Severity| used to sub-class a |clinical finding| concept according to its relative severity.

|Clinical course| represents both the onset and course of a disease.

|Episodicity| represents episodes of care provided by a physician or other care provider, such as a general practitioner. This attribute is not used to represent episodes of disease experienced by the patient.

|Interprets| refers to the entity being evaluated or interpreted, when an evaluation, interpretation or judgment is intrinsic to the meaning of a concept.

|Has interpretation|, when grouped with the attribute |interprets|, designates the judgment aspect being evaluated or interpreted for a concept (e.g. presence, absence etc.)

|Pathological process| provides information about the underlying pathological process for a disorder, but only when the results of that process are not structural and cannot be represented by the |associated morphology| attribute.

|Occurrence| refers to a specific period of life during which a condition first presents.

|Finding method| specifies the means by which a clinical finding was determined. This attribute is frequently used in conjunction with |finding informer|.

|Finding informer| specifies the person (by role) or other entity (e.g. a monitoring device) from which the clinical finding information was obtained. This attribute is frequently used in conjunction with |finding method|.

|Procedure site| describes the body site acted on or affected by a procedure.

|Procedure morphology| specifies the morphology or abnormal structure involved in a procedure.

|Method| represents the action being performed to accomplish the procedure. It does not include the surgical approach, equipment or physical forces.

|Procedure device| describes the devices associated with a procedure.

|Direct substance| describes the |substance| or |pharmaceutical / biologic product| on which the procedure's method directly acts.

|Priority| refers to the priority assigned to a procedure.

|Has focus| specifies the |clinical finding| or |procedure| which is the focus of a procedure.

|Has intent| specifies the intent of a procedure.

|Recipient category| specifies the type of individual or group upon which the action of the procedure is performed.

|Revision status| specifies whether a procedure is primary or a revision.

|Route of administration| represents the route by which a procedure introduces a given substance into the body.

|Surgical approach| specifies the directional, relational or spatial access to the site of a surgical procedure.

|Using substance| describes the substance used to execute the action of a procedure, but it is not the substance on which the procedure's method directly acts.

|Using energy| describes the energy used to execute an action.

|Has specimen| specifies the type of specimen on which a measurement or observation is performed.

|Component| refers to what is being observed or measured by a procedure.

|Property| specifies the kind of property being measured.

|Scale type| refers to the scale of the result of an observation of a diagnostic test.

|Measurement method| specifies the method by which a procedure is performed.

|Specimen procedure| identifies the procedure by which a specimen is obtained.

|Specimen source topography| specifies the body site from which a specimen is obtained.

|Specimen source morphology| specifies the morphologic abnormality from which a specimen is obtained.

|Specimen substance| specifies the type of substance of which a specimen is comprised.

|Specimen source identity| specifies the type of individual, group or physical location from which a specimen is collected.

|Laterality| provides information on whether a body structure is left, right, bilateral or unilateral. It is applied only to bilaterally symmetrical body structures which exist on opposite sides of the body.

|Has dose form| specifies the dose form of a product.

|Associated finding| links concepts in the |situation with explicit context| hierarchy to their related |clinical finding|.

|Finding context| represents a situation in which a |clinical finding| is known, or unknown, and if known, whether it is present, absent or uncertain (possible), and to also express the meaning that the finding is not actual but is instead an anticipated or possible future finding.

|Procedure context| indicates the degree of completion, or status of a |procedure|, as well as its various possible future states prior to its being initiated or completed.

|Temporal context| indicates the time of the occurrence of the situation, by indicating whether the associated procedure or finding is actual and therefore occurred in the present, in the past, or at a specified time; or that it is planned or expected in the future.

|Associated with| represents a clinically relevant association between concepts without either asserting or excluding a causal or sequential relationship between the two.

|Occurrence| refers to the specific period of life during which a condition first presents.