The SNOMED on FHIR working group (Terminology Binding Stream) have spent some time on trying to identify an equivalence mapping from SNOMED CT for a selection of FHIR Valueset codes, as identified by Grahame Grieve.  The group, consisting of a mixture of SNOMED and HL7 FHIR expertise, have achieved a range of results, which have been classified Red, Amber or Green according to the group's confidence level for each mapping.  See Free SNOMED CT set for FHIR for a more detailed background and notes on each Valueset.

A major point of discussion for the group has been around "context".  The requirement as articulated is that there should be a complete semantic agreement between SNOMED CT concepts and FHIR Valueset members to ensure safe and correct meaning, but what is agreed is that FHIR valuesets are used in a very specific context.   The code might just be the words "High" or "Low" but - in the context of a particular field in a particular resource - that word has a very specific meaning.   The SNOMED on FHIR group support  the aim to completely match this context, but on the other hand, to say that the informational model - the resource - provides the context and that merely matching the term used is sufficient for the purposes.     The provision of full context in the SNOMED CT concept would be most useful in the field of analytics, but other than a general sense that this is desirable, no clear use case has been presented.   On this basis, the input of HL7 is sought to provide some guidance/feedback on a number of points identified below:

In presenting some provisional work, the Red, Amber and Green mappings are being addressed as follows:

The following sections list the "Amber" mappings along with the group's specific questions.

The group's suggested approach here is to use  concepts taken from << 394731006 |Problem statuses and suggest that SI add a new concept for Resolved Problem.

No specific question here, I think we're just looking for feedback.   There is some context here in that we're looking at problem statuses, but from the SNOMED CT perspective, the context that we're talking about Allergy Intolerances is missing.

The main question here is about the suggested "Known possible" concept and whether this sufficiently matched the meaning of "unconfirmed".   In addition the group suggested moving 723511001 | Refuted (qualifier value) | to be a subtype of 410594000 |Definitely NOT present (qualifier value)| and (checking the daily build shows that) this has already been done and will therefore be available in the SCT 20190731 International Edition.

This mapping classifies on the red end of the amber spectrum.  The group thought that drawing values from << 272141005 |Severities (qualifier value)| was most appropriate, since that subhierarchy relates specifically to the severity of the reaction, rather than how likely it is to occur - which the group thought was implied by FHIR's choice of the display term "High Risk" which easily maps to 723509005 |High risk (qualifier value)|

Rather than maintaining two copies of the entire text here, readers are invited to read the original discussion in the parent page: Free SNOMED CT set for FHIR. 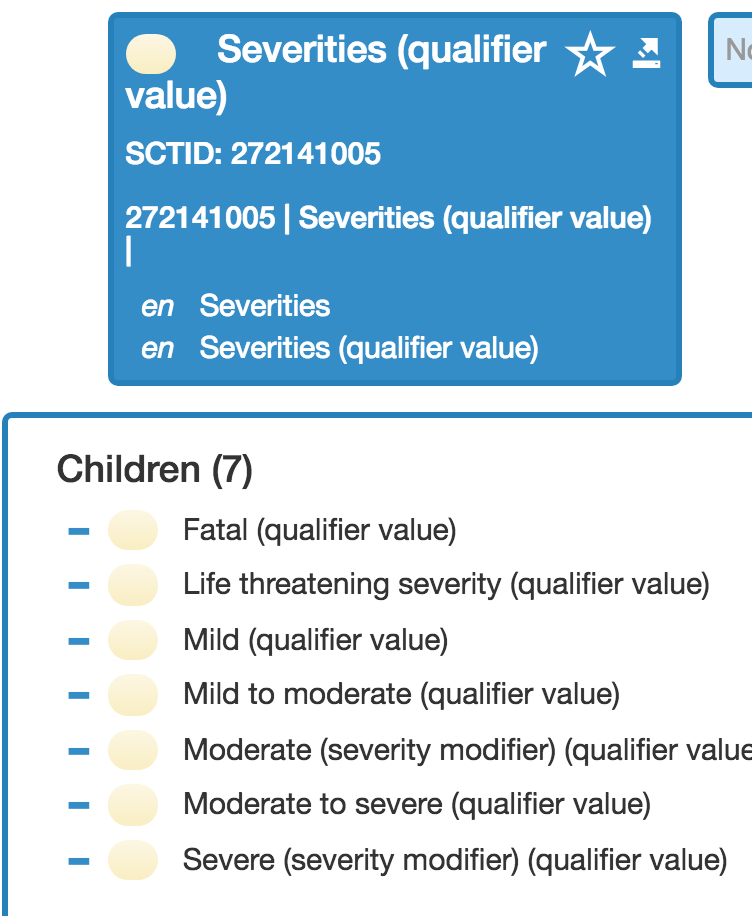 The question here is around the difference between Unconfirmed and Differential.   In SNOMED CT terms, both could be considered "Known possible" and while we might say "Suspected" for one and "Known possible" for the other, the group noted that 415684004 |Suspected (qualifier value)| is a specialisation of 410590009 |Known possible (qualifier value)| which means that everything that's true of "Known Possible" is also considered true of "Suspected" - as far as SNOMED CT is concerned anyway!