SNOMED CT provides a mechanism that enables clinical phrases to be represented, even when a single SNOMED CT concept does not capture the required level of detail. This is important as it enables a wide range of clinical meanings to be captured in a record, without requiring the terminology to include a separate concept for every detailed combination of ideas that may potentially need to be recorded. Application software that supports the use of SNOMED CT expressions enables detailed clinical information to be recorded, retrieved and analyzed.

SNOMED CT support of the postcoordination technique allows additional clinical detail to be represented if required. For example, |pneumococcal pneumonia| has a |finding site| of |lung structure|, which can be refined to |right upper lobe of lung|.

Postcoordination greatly increases the depth of detail that SNOMED CT can represent without having to include every possible specific site for every possible disorder via a concept. For example, the concept |bacterial pneumonia| has a defining relationship specifying its |causative agent| as |bacteria| and this can be refined to |Streptococcus pneumoniae|.

Precoordinated expressions are expressions that represent the meaning of individual concepts which are predefined in SNOMED CT. Besides the unique concept identifier and descriptions, each concept also has a formal logic definition represented by a set of defining relationships to other concepts. The figure below shows the precoordinated expression used to record |fracture of tibia|. It illustrates that this can be represented by a single identifier, with or without an accompanying human-readable term. It also illustrates the defining relationships of the concept identified in the expression. This is the precoordinated definitional knowledge which is conveyed by this expression.

The second example shown below illustrates the fact that some SNOMED CT concepts provide quite a lot of detailed refinement, some of which might otherwise be captured separately. We will return to this example when considering postcoordination.

Expressions that contain two or more concept identifiers are referred to as postcoordinated expressions. Postcoordination combines concepts and allows more detail to be added to the meaning represented by a single concept. A postcoordinated expression is not just a list of concept identifiers, it follows a set of rules that mimic the way attributes and values are used to define SNOMED CT concepts.

There are several valid ways to represent and store postcoordinated expressions. However, to support interoperability, SNOMED International has specified a standard SNOMED CT compositional grammar form that is both human-readable and computer processable. The examples of expression that you see in this guide use this grammar.

Postcoordination and the Concept Model

The refinements used in postcoordinated expressions should follow the same concept model rules that are applied when concepts are defined. Attributes should only be applied to concepts that are in the specified 'domain' for that attribute. The values applied to attributes should be limited to the specified 'range' for that attribute. These rules may sometimes seem to limit flexibility but these rules are important, because if they are followed, it is possible to compute similarities and subtype relationships between different expressions. This ability to compute subtypes is the key to effective meaning-based retrieval of postcoordinated expressions.

In some cases, postcoordination may be simply a matter of choosing one of the subtypes of a defining attribute value. For example the definition of |total hip replacement| includes the attribute |direct device| with the value |total hip replacement prosthesis|. The subtypes of this value include different types of prosthesis, some of which are shown in the graphical view of the concept definition below. One of these more specific values can be selected to specify the type of prosthesis actually used. 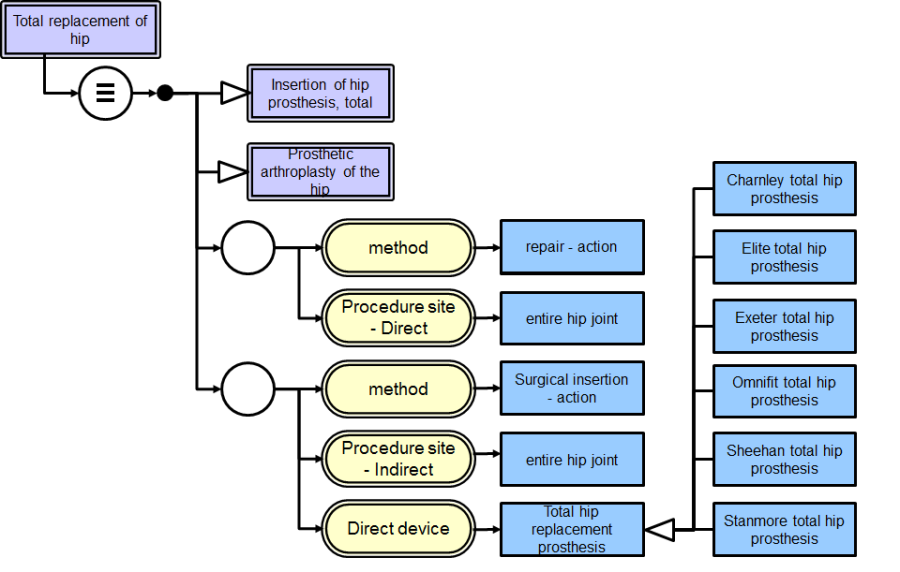 In the same way clinical situations, such as family history, can be recorded for any disorder and are not limited to a predefined set of conditions.

SNOMED CT expressions support consistent and comparable representation of meaning using both precoordinated and postcoordinated expressions. This facilitates retrieval of all instances of expressions that match a set of criteria specified using the subtype hierarchy and other defining relationships.

The following graphics illustrate the ways in which query predicates based on SNOMED CT concept definitions can be used to retrieve data based on different criteria. In each case, the data retrieved includes expressions that either have attributes matching the criteria or refer to a concept with defining relationships that match the query criteria. 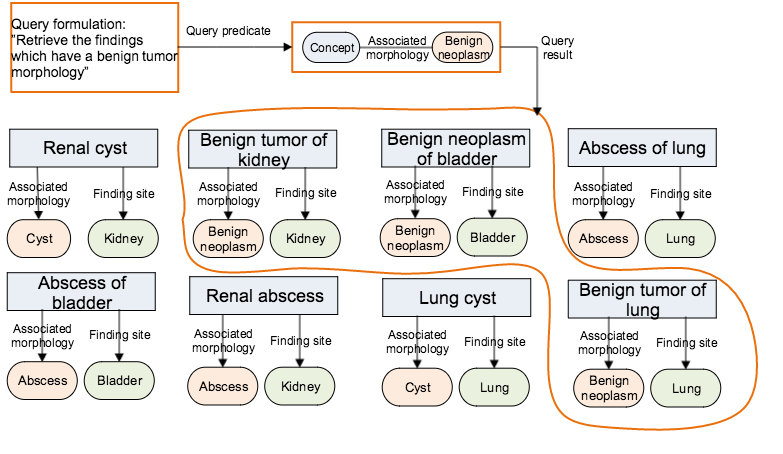 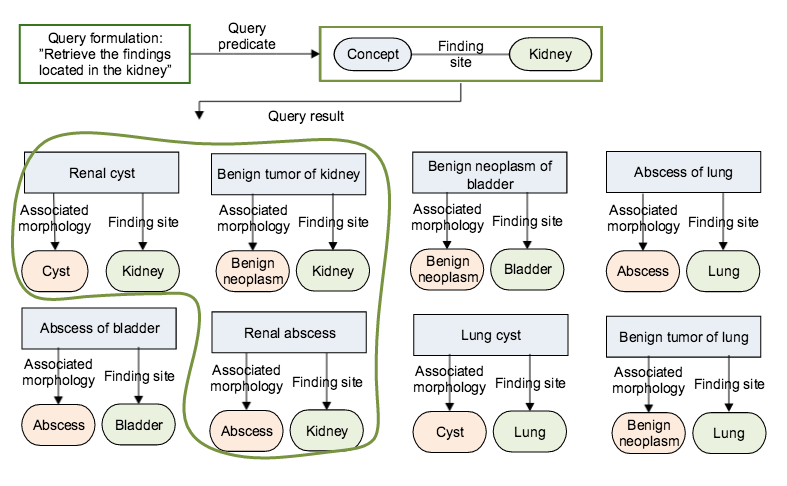