This briefing paper details changes proposed by SNOMED International's Modeling Advisory Group to enhance SNOMED CT's Description Logic capabilities.   The proposal has been accepted by SNOMED International's Management Team to be put forward for consultation with the wider Community of Practice - including Member Countries, Vendors and adopters of SNOMED CT.  This document is intended to be read by technical staff in organisations who produce SNOMED CT content as an extension to the SNOMED CT International Edition.   It should be read in conjunction with the attached Executive Summary which gives an overview of the background and drivers for proposing enhancements to SNOMED CT at this time.

On completion, readers are invited to submit questions and comments via this form before the cut off on 28 February 2018.   Responses to this feedback will be posted on this confluence page.

The motivation for introducing these enhancements to SNOMED CT's Description Logic capabilities is to enable improvements to the quality and analytics capabilities of SNOMED CT.

The use of Description Logic together with a computer program that performs Logic Reasoning (referred to as a "classifier") allows concept hierarchies to be automatically created and maintained based on the logical definition of each concept.  This automation improves the quality of the clinical information represented by SNOMED CT as well as reducing the maintenance burden inherent in modifying an increasing volume of content.  With accurate logical definitions for each concept, authors can take advantage of the classifier's ability to infer new parent/child relationships automatically, rather than being required to state every valid relationship explicitly - a task which is both immensely time consuming and error-prone.

The proposed changes will benefit: 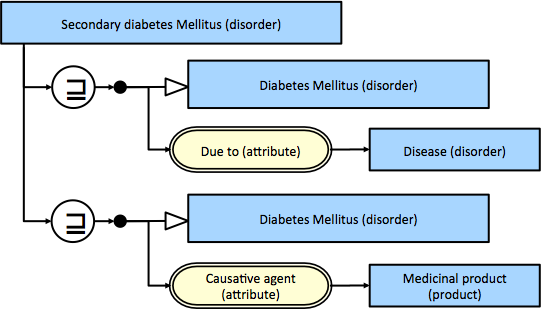 The proposal is to make more types of information available to the classifier than can currently be expressed within the limitations of the RF2 Stated Relationship file format. In the current classification process, the Stated Relationship file is used as input to the classifier to enable it to calculate an inferred hierarchy. The output of this process is converted into Distribution Normal Form (DNF)1 and represented using the RF2 Relationship File. In the proposed classification process, logical definitions utilizing a wider range of Description Logic features will be available to the classifier, which will allow more accurate automatic inferences to be performed.

One of the principle considerations in designing this proposal is to minimize the negative impact for organisations who do not wish to (or are not in a position to) take full advantage of the new capabilities.  The use of reference sets to replace the stated relationship file, while preserving the format of the more commonly used (inferred) RF2 Relationship File, will allow most users to benefit from the improvements in classification, without requiring changes to existing systems.

A new RF2 reference set file containing OWL Statements in Functional-Style syntax will initially augment, and subsequently replace the existing Stated Relationship file. The name of the new reference set file is expected to follow the format "der2_sRefset_StatedOWLFull_INT_YYYYMMDD.txt", and be published as part of the SNOMED CT International Edition. The OWL statements will be organised into two refsets as follows:

The header information in the OWL ontology reference set as well as some of the attribute logical properties (such as the fact that the  123005000 |Part of| attribute is transitive in nature) will now make explicit behaviour that has previously been somewhat hidden in existing software tools.

Allowing SNOMED CT to use the full range of logical expression that is possible with Description Logic would cause a dramatic increase in classification times1. It would also increase the complexity for content authors in their mission to correctly define the meaning of clinical concepts. As such, the Modeling Advisory Group has recommended the addition of only those Description Logic features that are essential to support the proposed modeling of new content in specific priority hierarchies. This aims to successfully strike the balance of being able to express essential meaning, while not introducing unnecessary complexity.

The proposed new logic features are explained in the table below:

An example of the proposed refset file format with some sample rows is shown here (preferred terms have been included to aid readability):

To make it easier for organisations with a requirement to classify SNOMED CT, SNOMED International will make an open source classification service available to download.  This service will classify SNOMED CT based on the new OWL reference set file. As well as performing classification, the service will calculate changes to the (inferred) relationship file in the Distribution Normal Form2, and will (eventually) produce a complete OWL Ontology file which can be imported into tools such as Protégé. This will replace the existing PERL script that is provided for converting RF2 file to OWL.

The new SNOMED CT classification service will be used internally by SNOMED International for authoring terminology and producing releases. External organisations will be able to run the service locally, or use it as a reference implementation to implement these features in their own software.

The table below shows the features that will be introduced over the next few releases of the SNOMED CT International Edition.  This is an optimistic timeline that has been driven by the desire to fulfil obligations for successful delivery of work being done in the  373873005 |Pharmaceutical / biologic product (product)| and  105590001 |Substance (substance)|  hierarchies:

SNOMED Implementers can be considered in two broad categories - those who consume SNOMED as it is published without adding further concepts (Consumers), and those who add concepts to an extension (Producers).   The following two checklists address both these categories of implementers in turn.   Since Producers make content for use by Consumers, both tables will be of interest to them.

Feedback on this proposal is invited via this form.  SNOMED International will respond to feedback (within two weeks of receipt) by posting responses on this page of our confluence site. The consultation period finishes on 28th February 2018.

1 Testing shows classification time increasing from 50 seconds to 1.5 hours, which is considered unacceptable in a realtime authoring environment.

2 The term "Distribution Normal Form" (DNF) will be changed to Necessary Normal Form (NNF) to better reflect the content of the (inferred) Relationship file.